H1 Championship to be decided in San Diego 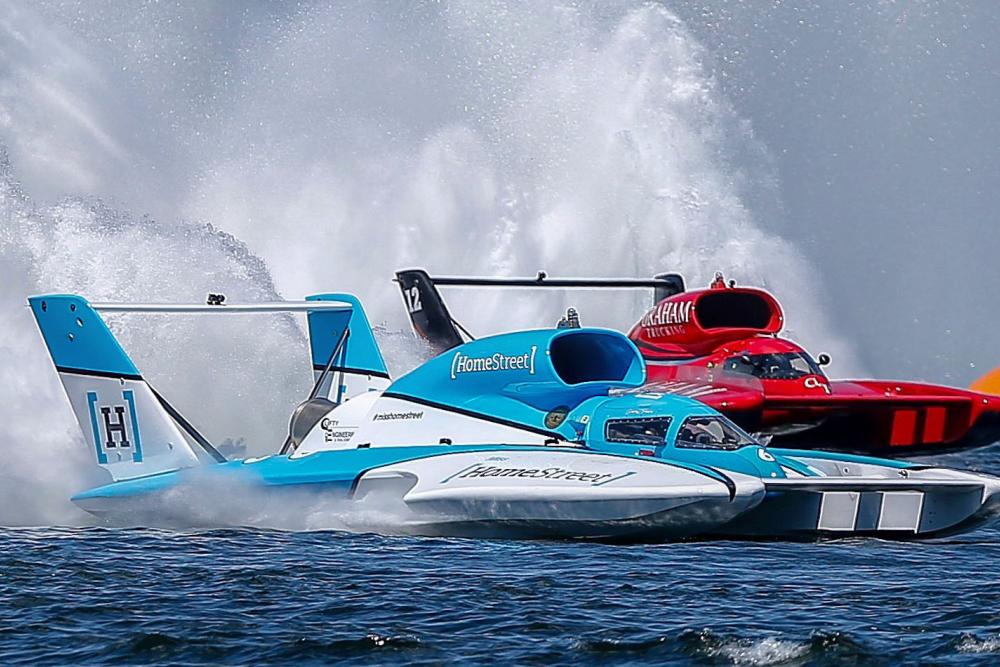 The U-6 Miss Homestreet and U-12 Graham Trucking

Jimmy Shane, driver of the “Miss HomeStreet” race boat, and J. Michael Kelly, driver of the “Graham Trucking” are expected to clash during the 54th running of the HomeStreet Bank at Bayfair race, September 13-15 on Mission Bay in San Diego. The contest of six of the world’s fastest race boats will decide the 2019 national championship for the H1 Unlimited Hydroplane Racing Series.

Shane, from Maple Valley, Wash. and Kelly from Bonney Lake, Wash. have won two races each during the H1 Unlimited Hydroplane Racing Series summer of racing. Shane, 33, won races at Guntersville, Ala. and the APBA Gold Cup trophy race in the team’s hometown, Madison, Ind. Kelly, 40, won the past two races: one in Kennewick, Wash. and one in Seattle.

Shane has a lead of 1,443 national points over Kelly as the series wraps up on the 2-1/2 mile race course on Mission Bay. The boats will pit at Ski Beach Park, 1600 Vacation Rd., San Diego throughout the weekend.

Shane has five national championships (2013-16), four with his current Miss Madison Racing team, which has earned a total of eight national titles since first entering a boat in 1961. The total is second on the all-time total team championships list, but well behind Bernie Little’s “Miss Budweiser,” which won 23 championships.

“We are in a good position to win the national championship,” Shane continued, “it’s ours to lose.” Shane must run consistently all weekend without mishap, to maintain his lead over Kelly. Shane said, “We have to run a smart race. We will go for the race win after we achieve the championship, hopefully in the earlier preliminary heats.”

Although Kelly has yet to win a national championship, he has nine career victories, including the Oryx Cup Union Internationale Motonautique (U.I.M.) World Championship in 2009 and 2014

Kelly said, “We wish it was a tighter points gap, but as a team, everything is clicking. We get faster every time we go out.” He continued, “ You never know what will happen. We are not giving up until all the points are added up at the end of the weekend.”

Kelly is known as one of the most consistent starters, a skill where the drivers must make a run at the starting line without crossing it before the race clock clicks down to zero. Many compare Kelly and his starting ability to the late, great Bill Muncey, who lived in San Diego during the latter years of his career and who is known to have helped establish the first race on Mission Bay in 1964.

Kelly said the focus would be getting into the final race on Sunday. “We have been on a roll and we would like to end the season with three wins and give us something to build from for the offseason,” Kelly said.

Kelly’s team sat out most of the 2018 season, but he said, “the team has worked real hard this season and we are looking forward to the future.”

Bringing his international flair, Bert Henderson, from Brockville, Ontario, Canada, will compete in his first Bayfair race. The 47-year-old Henderson, driving the U-7 “Spirit of Detroit,” is in his first full season competing on the national circuit. Prior to 2019, Henderson had driven only in Detroit races. Henderson is currently in third place in the points chase with 4,398 points.

The surprise of the season has been 40-year-old rookie Corey Peabody, driver of the U-98 “Graham Trucking American Dream.” Peabody, a childhood friend and teammate of Kelly’s, has been consistent all season. His best finish was at the Gold Cup trophy race in Madison, Ind. where he placed second in two preliminary heats. He is currently fifth in the national points standings

Rounding out the field is Jamie Nilsen, driver of the U-11 “J&D’s presented by Reliable Diamond Tool,” and Jeff Bernard in the U-1918 “Oberto Super Salami.” Both drivers joined the circuit at the Columbia Cup in Washington State at the end of July.

In a rare mid-season driver change, Nilsen replaced longtime U-11 driver Tom Thompson, who drove the first two races of the season. Prior to assuming the driver’s seat in the U-11, Nilsen last drove an H1 Unlimited hydroplane in 2014. He won his first career preliminary heat while racing in Seattle last month.

Nilsen said, “This will be my first time racing an H1 Unlimited hydro in San Diego. Our goals are to keep improving as a team every time we go out and compete for wins.

“I feel like we’ve come a long way from where we started.” He said the team keeps making the boat better and he keeps getting more comfortable in one of the world’s fastest race boats.

Bernard and his team also won a preliminary heat in Seattle. Bernard has four career victories, including the race in San Diego in 2008. His most recent win came in 2011 in Evansville, Ind.

The Mission Bay is known to have very fast water because of its length and the density of its salt water. This is the only saltwater race on the circuit. While the teams are expected to reach speeds near 200 mph, the course will not certified for records.

Tickets are available at www.SanDiegoBayfair.org and range from $45 for all three days to $30 on Sunday.