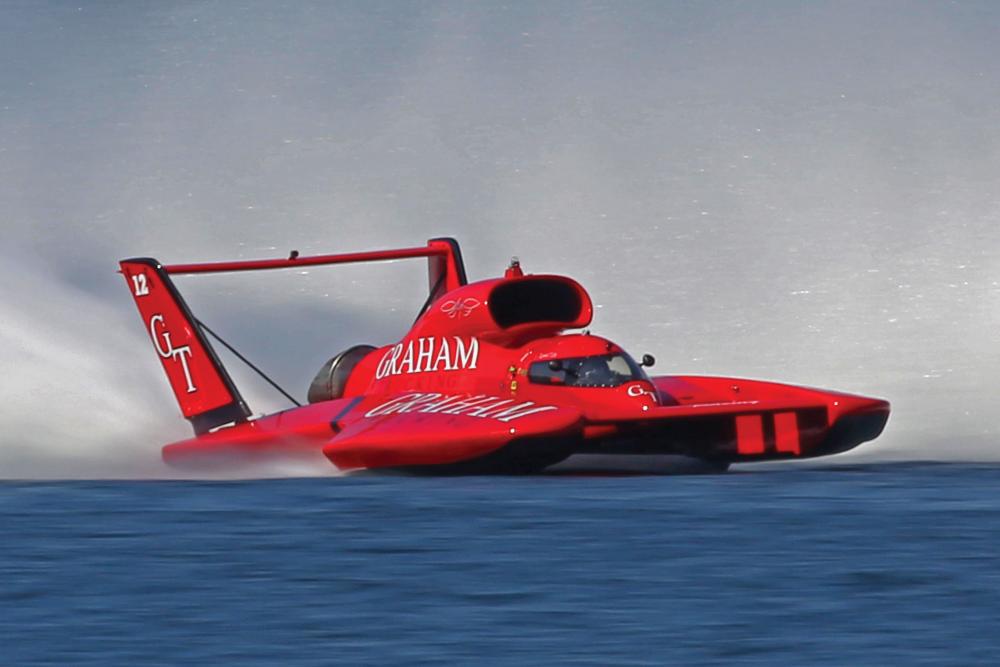 J. Michael Kelly driving the U-12

J. Michael Kelly, from Bonney Lake, Wash., driver of the U-12 Graham Trucking Unlimited hydroplane, closed the books on the 2019 season with his third victory of the year, during the 55th running of the HomeStreet Bank Cup at Bayfair on Mission Bay in San Diego.

Kelly outran his nearest competitor, Jimmy Shane, in the U-6 Miss HomeStreet by grabbing the inside lane during the pre-race milling. Kelly utilized his new strategy after H1 Unlimited officials decided to suspend the minimum pre-race speed of 80 mph, prior to this weekend’s event.

Kelly said, “It was really nerve-wracking out there before the start, just putting around. There is a lot of time to think about things and then you see the other guys coming up fast, but I knew my only chance was to get the inside lane.” He said, “It was all or nothing.”

Once Kelly strategically established lane one, Shane battled deck-to-deck at the start; but by the end of the first of five laps began to slip further and further behind Kelly’s red and black Graham Trucking race boat.

“Great racing this weekend with the Miss HomeStreet; not the result we wanted in the final, obviously, but with the change in rules we knew drivers were going to start parking early. We didn’t know what type of risk they would take in the salt water, so we played it by ear,” Shane said.

He continued, “We got up there early with Mike (Kelly) but I didn’t feel comfortable with our boat’s setup to troll at those low speeds, so I decided to peel off and go around for a flying start,” Shane said. “We had a good start, but Mike had a great start too and accelerated really fast.”

Shane said Kelly’s acceleration after the trolling start surprised him; “We hung with him on the first lap but he slowly pulled away from us.”

Jamie Nilsen in the U-11 J&D’s presented by Reliable Diamond Tool appeared to be washed down by a competitor's roostertail spray and went dead in the water in turn one of lap one.

Bert Henderson, driving the U-7 Spirit of Detroit tried to keep up with Kelly and Shane from lane three, but officials quickly determined Henderson had jumped the start line.

Jeff Bernard in the U-1918 Oberto Super Salami trailed even further--by about four roostertails--at the end of lap two.

Corey Peabody in the U-98 Graham Trucking American Dream went dead in the water in the backstretch of lap one, but was able to restart and continue racing.

By the end of lap two, Kelly had increased his lead by another half of a roostertail despite Shane’s constant pressure.

When the boats completed lap three it was evident that Shane would not be able to catch Kelly from the outside unless Kelly experienced a mechanical failure.

When the spray settled at the final lap, Kelly spaced his lead in front of Shane by several roostertails, capturing Sunday’s winner-take-all final. Shane was second, followed by Bernard. Despite jumping the gun and being assessed a one minute penalty, Henderson gained enough to score fourth place. As these drivers finished and returned to pit row, Peabody was still completing his last lap after earlier going dead in the water.

Did Not Finish: Jamie Nilsen, U-11 "J&D’s presented by Reliable Diamond Tool”